The Monkey Puzzle Tree (araucaria araucana) is a dioecious evergreen conifer that is native to the woodland volcanic slopes of the Andes Mountains of South America.  It is the national tree of Chile (also very common in Argentina), but is endangered and is protected by CITES, the Convention on International Trade in Endangered Species.  Monkey Puzzle Tree can reach stately heights of 90 to 130 feet in its native habitat. However, it characteristically grows up to 30 feet in height and 20 feet in spread if cultivated for landscaping purposes. After 20 years, the trees produce both male and female pinecones which produce large seeds.  Historically, the seeds were an important food source for the indigenous people of the Mapuche culture. 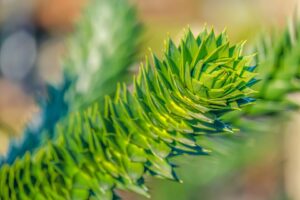 Araucaria Araucana is winter hardy in USDA Zones 7-10 and prefers full sun/part shade and fertile soil. Nevertheless, they can also grow in a variety of soil types if they are well draining.  The trees cultivate well in coastal regions with cool to warm temperatures, but do not like heat or dry conditions. The trees can also be grown in containers but will need to be overwintered indoors and given bright, indirect light exposure. The foliage will benefit from occasional misting during this time. Monkey Puzzle trees normally do not have any ongoing disease or pest difficulties, however, canker, Needle necrosis, Spider mites, scale, mealybugs and thrips are usually associated with this species.

Because of their unique, visual qualities (long, prickly, rope-like branches), Araucaria Araucana would be a welcoming addition to any ornamental landscape.

Arum Lily | A Striking, Easy-to-Grow Flower for the Garden

Emperor’s Candlesticks | A Flower, Shrub and Medicinal Herb for the Garden

Copyright © 2022 Anna's Garden Design Services. All rights reserved.
Select the fields to be shown. Others will be hidden. Drag and drop to rearrange the order.
Click outside to hide the compare bar
Compare
Compare ×
Let's Compare! Continue shopping